A week behind the scenes at SONY

Written by: on August 1, 2017Tags: Day in the life of, Inspiration, Teen, Teen Blogger, Women in Tech

As a Year 10 student, I recently had a work experience placement, which was at one of the leading technology companies, Sony Interactive Entertainment – or PlayStation, to you and me! This amazing opportunity wouldn’t have been possible without the help of InnovateHer, and that’s why I agreed to write this blog post to share my experiences. So here’s a list of the top 5 things I learnt during the week:

There’s multiple paths into the industry.

This is perhaps the main lesson I got from my experience at PlayStation – pretty much everyone I spoke to had a different route into their career. From marine biologists to lawyers to the minority of people with an actual qualification in games, it seems just about every career path is represented there.

That means there isn’t really a wrong path; as long as you’re passionate about games and you work hard, it doesn’t really matter what you study, just that you don’t give up.

Additionally, a lot of people had started off in one section and moved around the company to try new things, so there’s definitely many opportunities available even after the first role. So again, even after you get a job in an area you thought you’d like, you’ll still be able to experience different things!

There are so many more (equally important!) roles than you’d think.

If you’re interested in the industry but not really sure what part of it you’d like, there are so many different career opportunities. PlayStation isn’t a huge company for nothing; there are lots of important roles within different teams.

Pretty much every department was introduced as perhaps the most important in the whole company; it wasn’t hard to see why. Every single team did something crucial and had a real impact. There are definitely no useless jobs! 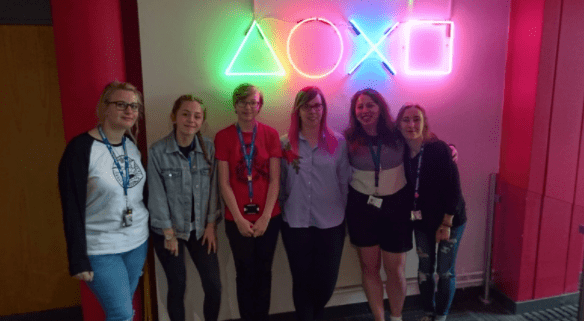 A common misconception is that a job at a place like PlayStation basically means you just get to sit around and play games all day. In some ways, that’s true – depending on the department. For example, if you’re a tester, not only do you get to play a lot, you get to play the same game for months at a time! It’s difficult enough to test effectively and efficiently, but imagine playing the same title, in different (hopefully less) buggy builds, for such a long period of time…this could be some people’s idea of heaven.

It’s clear that even if the job involves a lot of gaming, it’s not always easy. There’s also a widely held misconception that only gamers would get a job at Playstation; but several employees told me that they expected their lack of gaming experience would be a detriment, yet were still hired. So it’s also clear that, once again, that misconception isn’t true.

It’s also important to note that just because some people play the same title for so long, it doesn’t mean that the job isn’t exciting, and I’ve been told by many different people in many different departments that no two days are the same; it’s hard to know what to expect! Just because there can be some repetition in some areas, it doesn’t mean that a job at PlayStation isn’t dynamic and stimulating.

The atmosphere is amazing.

Could sweet stations be PlayStation’s secret to success? Or is it the talented, hard-working and friendly staff over the ability to have one (or three) lollipops whenever you feel like it? Whatever it is, it’s working!

Everyone I had the pleasure of meeting over the week had three things in common: they were friendly, they were really, really good at their jobs, and they absolutely loved what they were doing. I really enjoyed the atmosphere at the company, and this, in particular, led to a great experience.

Girls can do it too!

Even though a job at a place like PlayStation is often seen as within a stereotypically male-dominated industry which can be off-putting, I had the pleasure of spending time with plenty of talented women with important roles all over the company. So don’t be discouraged if you want to get into technology; there is a place for everyone, no matter what your gender is.

Overall, I am really thankful for the incredible experience I’ve had and I’ve learnt so much from my time there. My top tip to other girls starting on this journey would be: just be confident and passionate, and nothing can stop you.