Today marks two important birthdays: The Boy Who Lived and the writer who conjured up a magical world that became so closely intertwined with our own. Joanne Rowling, better known as JK Rowling, wrote the beloved Harry Potter series that changed the face of publishing and caused a crossover between literature and popular culture. But most importantly, she encourages inclusivity; Harry Potter speaks to both children and adults of any identity and is a globally accessible story about friendship, courage, and tolerance. Rowling is not only a tremendous storyteller but is also a source of inspiration and encouragement who is not afraid to stand up for what she believes. She has shared some golden nuggets of advice throughout her career and her story is one to inspire us all. Today is a good day to celebrate her work and wisdom. 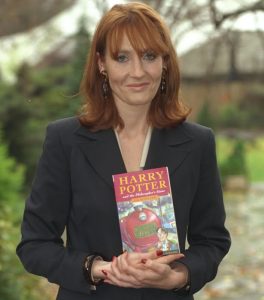 It is impossible to live without failing at something, unless you live so cautiously that you might as well not have lived at all, in which case you have failed by default.

If you’ve ever worried about the timeline of success or put yourself under pressure for not achieving things sooner, worry not. Rowling’s work was not recognised straight away, but that didn’t sway her from getting her novel published. She had the ambition to become a writer from a young age and penned her first book about a rabbit with measles at the age of six. Her idea for Harry Potter first came to life in 1990 on a delayed train from Manchester to London, when she was working as a researcher and bilingual secretary for Amnesty International. The first novel wasn’t to be published for another seven years. It’s hard to believe that The Philosopher’s Stone was rejected by 12 publishers, but having a firm belief in Harry and her inclination to write, Rowling continued to send out her manuscript until it was picked up by Bloomsbury. Perseverance is key and, in the words of Ginny Weasley, ‘anything’s possible if you’ve got enough nerve.’

I was set free because my greatest fear had been realised, and I still had a daughter who I adored, and I had an old typewriter and a big idea. And so rock bottom became a solid foundation on which I rebuilt my life

Aside from getting rejected by publishers, Rowling’s personal journey to success was not easy. She teaches us that the feelings of ‘rock bottom’ and ‘failure’ certainly do not signify the end, but an opportunity to grow anew. Before Harry Potter propelled her into a mind-boggling fortune and successful writing career, Rowling overcame hardships, loss and poverty. In 1991 she spent three years in Portugal working as a foreign language teacher. During this time, she had a short-lived marriage, gave birth to her first child, and wrote the first three chapters of The Philosopher’s Stone. Rowling then moved to Edinburgh, jobless and a single parent, to be near her sister and continue working on her novel. She describes her situation ‘as skint as you can be without being homeless,’ surviving off benefits and part-time work. She has openly discussed her experience of depression during this time, reminding us that mental health difficulties are nothing to be ashamed of. Writing Harry Potter became a way of coping – and subsequently a way of coping for many of her readers. Themes of grief and loss are present throughout and depression comes in the form of ‘soulless and evil’ Dementors, but in the end, light wins over darkness.

I think you have a moral responsibility when you’ve been given far more than you need, to do wise things with it and give intelligently

This would be an extremely long post if I were to list the awards and honours Rowling has received since publishing The Philosopher’s Stone. From countless book awards to be Time’s Person of the Year in 2007, and voted Britain’s most influential woman in 2010, both her work as a writer and as a philanthropist offer social, moral and political inspiration. Be sure to follow her on Twitter to witness some witty and sharp replies to the likes of Donald Trump, Piers Morgan, and any form of bullying or intolerance. Rowling would be the first billionaire writer, but she lost the title by donating so much of her earnings to charity. She actively practices what she preaches by supporting and building charities like Lumos, which helps support families living in poverty and end the institutionalisation of children worldwide. Her personal experiences have motivated her to support research and treatment for multiple sclerosis, after losing her Mother to the condition in 1990, and she is president of the Gingerbread charity that supports single-parent families.

No story lives unless someone wants to listen. The stories we love best do live in us forever. So whether you come back by page or by the big screen, Hogwarts will always be there to welcome you home.

Rowling made so many of us feel at home in the complex and intricate world of colourful characters we could connect with and learn from. It’s one of those fictional rarities that has become so ingrained into our society and culture, that asking someone what Hogwarts House they’re in feels as normal as asking someone what they do for a living (for what it’s worth, I’m in Hufflepuff). Harry Potter is not only an exciting story of wizards and magic, but it also tackles complex themes of grief, war and prejudice, drawing in adult and young readers alike. There are even studies that prove reading the stories makes you more empathetic and reduces prejudice. As a young female reader, Hermione was (and still is) my hero, and I’m sure there are many others who will agree. I’d never come across a female character who had so many layers, was unapologetically herself without the need of approval from others, and stood strongly by her morals to fight injustice.

Happee Birthdae to Harry and Jo, from InnovateHer and beyond.