International Women's Day is a joyous occasion for everyone globally.

Since the beginning of time, women have been disproportionately discriminated against resulting in our achievements, strength, and essence being undermined. First occurring in 1911 in Austria, Denmark, Germany, and Switzerland, International Women’s Day was originally created to press for demands, such as women’s rights to work, vote, and adequate training.

What it means to us

InnovateHer has been championing women and girls since 2014, giving them free access to tech education and opportunities. We believe in women, we believe in equality, and we believe in inclusivity. So, it’s not a stretch to imagine that International Women’s Day is a huge occasion for us. I mean, a full day dedicated to empowering, amplifying, and celebrating women – we are here for it!

Each year, International Women’s Day holds a unique call to action, effectively holding those celebrating in solidarity. Last year’s theme was #EachForEqual. This year’s theme was #ChooseToChallenge, which called for people to pledge what they will actively challenge in the ongoing fight for gender equality. Here are some of our pledges: 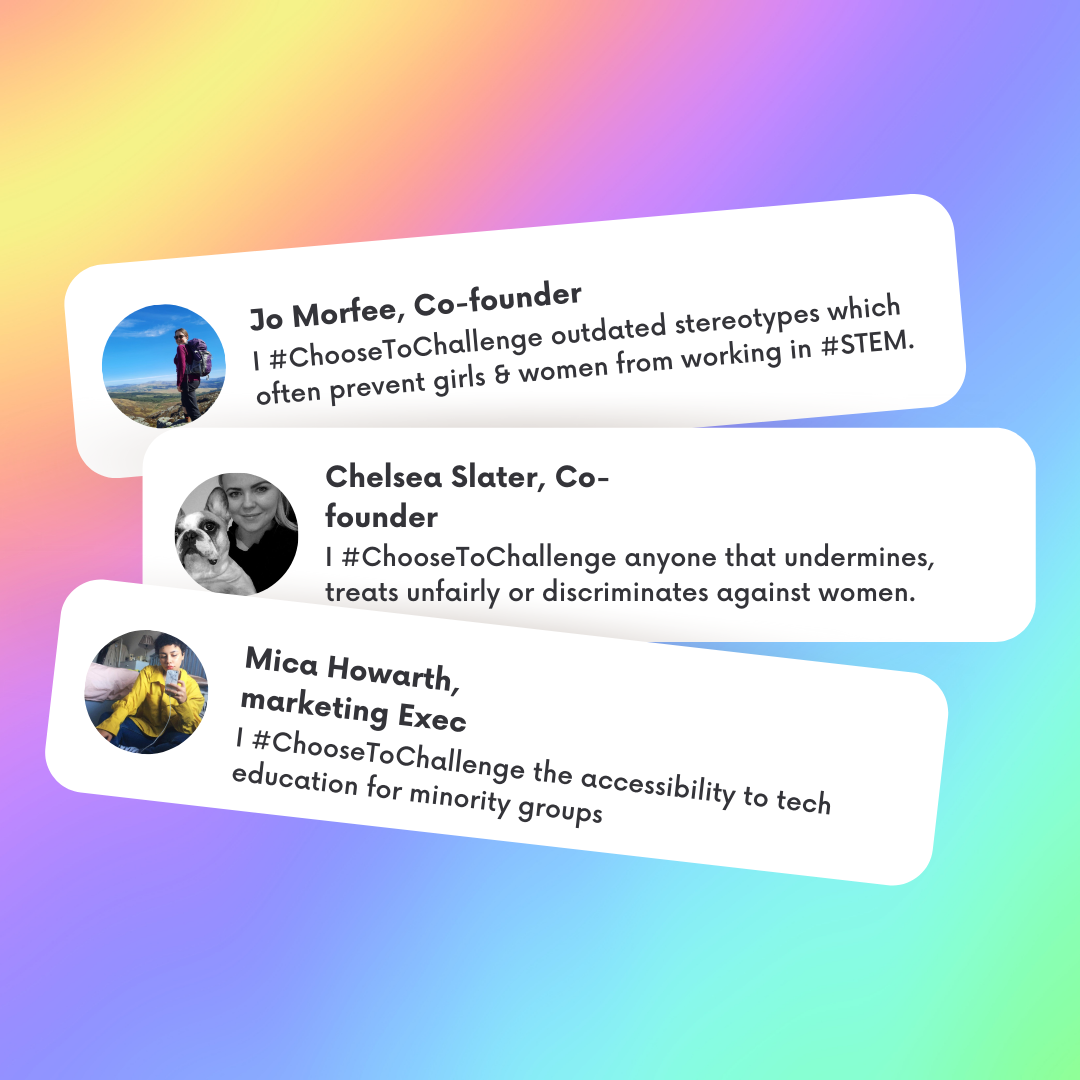 As well as having personal pledges, we also had a collective pledge – an InnovateHer pledge, and this came in the form of our International Women’s Day campaign.

Our IWD campaign was to inspire people to #ChooseToChallenge the various inequalities within the tech industry, such as the gender gap, the UK curriculum, and the digital skills gap by signing up to our all-new Ambassador Scheme.

Our all-new Ambassador Scheme is a way for us to connect inspiring industry role models to the next generation of techies, through the power of advocacy, education, and networking. Once signed up to our Ambassador Scheme, our ambassadors receive:

Throughout the day, we featured short videos of some of our most influential ambassadors, stating what they #ChooseToChallenge by being signed up to the scheme.

If you’re one of our proud partners, and you feel like this scheme could nourish your talented tech employees, come catch up with us next week where we will explain all in this exclusive virtual event below.

If you’re a tech professional or tech student, and the above benefits sound good, why not head to our ambassador page and get signed up – you will never be asked to do anything which is outside of your capacity!

After a busy day on social media, chatting with our friends, and delving into other people’s campaign efforts, our IWD celebrations were hardly over – we had a celebration to attend.

This is because last year, the InnovateHer team had been nominated for the ‘Small Organisation’ award by Northern Power Women at their annual award ceremony, Northern Power Women awards. The NPW Awards recognises, showcases, and celebrates role models across all genders, sectors, ethnicities, abilities, and regions, and this year, it took place on International Women’s Day.

Excited for the virtual occasion, our extended team dressed up to the nines and navigated through cyberspace to our designated table. We chatted whilst enjoying live-streamed entertainment, from beautiful poetry read by Amina Atiq, to live music from Deana Music. Our Digital Marketing Executive Mica later said ‘First night out with my powerhouse team at #InnovateHer – never thought it would be virtually but feeling more connected than ever.’ 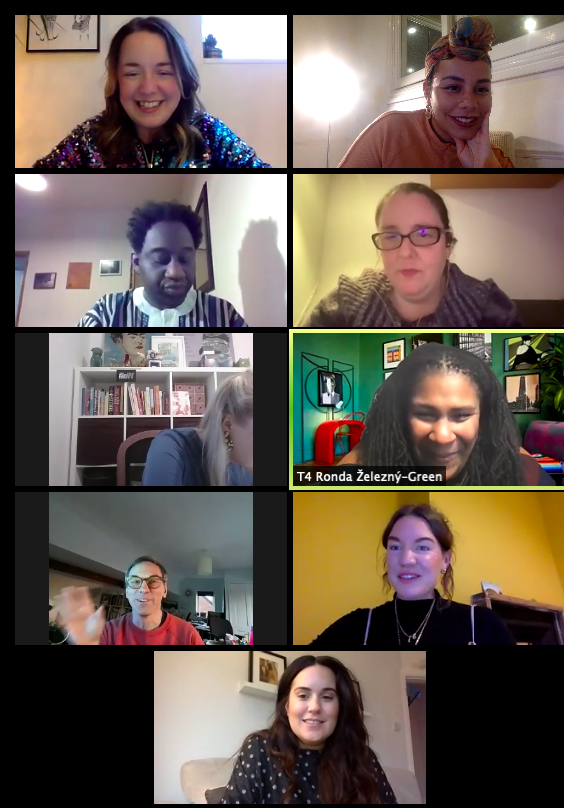 The night finished on a high for the iHer team when we won our award! Totally taken aback, our co-founder Chelsea accepted the win live, later saying ‘i really didn’t expect that!’. We cheered, celebrated, and most importantly, reflected on our journey over the past year. Like many small organisations, the challenges that COVID19 introduced to us last year was a threat to our cause and our spirit, so to be celebrated in front of our friends, employees, and network as Northern Power Women allowed us to be, was the icing on top of International Women’s Day flavoured cake. 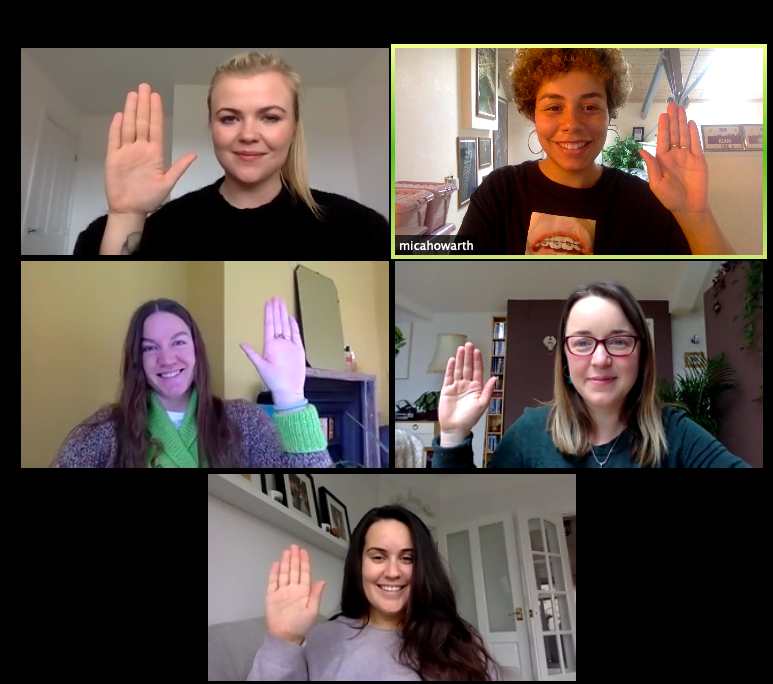 See below to hear our co-founders, Jo and Chelsea give thanks for our award.

Want to know just how we held up last year? Tap below to get a free copy of our newest Social Impact report, which gives a heartwarming insight into how we impacted our community, partners, and most importantly – the students we work with.