Written by: on March 7, 2019Tags: Careers, Interviews, Meet the Members

Our proud member Uniform recently celebrated their 20th year! We wanted you, our community, to find out a bit more about this 20-year-old trailblazing creative agency so we headed over to their office on Bold Street, Liverpool, to speak to Deepesh, a Motion Designer. 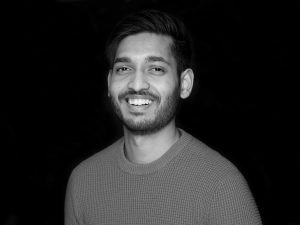 Deepesh helped create the graphics for our fantastic #InternationalWomensDay social media campaign earlier this year. So we naturally wanted to know more about his digital creative journey and his work at Uniform.

Do you have unusual facts about yourself?

Every year, if I have the time (and a party to go to) I like to make my Halloween costumes out of cardboard. Last year I was Alien (from the film ‘Alien’). Other years have included: Dr Neo Cortex from Crash Bandicoot, Mojo Jojo from Powerpuff Girls and a splicer from the game Bioshock.

Can you tell us a bit about Uniform and what your role is here?

I’m the Motion Designer in the film team at Uniform. It involves a lot of various projects, including film editing, illustration and animation.

Can you expand on what a Motion Designer is, what you do and how you got into it?

It’s basically taking illustrations or graphics and making them move and look interesting. I did Illustration at Loughborough University and I did a bit of animation there. My first job after university was where I really learnt about animation. I met a lot of people there who helped develop my skills. 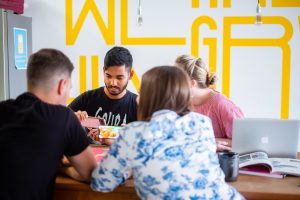 Were there any projects that you were really proud of at university?

My dissertation was on the representation of women in horror film posters. I was looking at the differences between film posters before and after the 1970s and how it illustrates the changing role of women in society. I feel like horror film posters, especially the older monster films, are very clear with their messaging. There’s usually a giant creature holding a passive and usually half-naked woman. During the 70s it’s more about the females becoming the monster and there’s a shift in power. There were also a few possession films that focused on little girl characters. So, for example, one interpretation of The Exorcist is that it represents society’s fear of feminism and the fear of girls becoming less innocent. After the feminist movements of the 1970s, a lot of action films came out to counteract the movement and re-emphasise masculinity. Post-1970s women became quite strong protagonists in horror films. They were no longer just passive victims.

Have you always been interested in animation and illustration?

Yeah, I’ve been drawing since I was a kid and I think I knew quite early on that this was what I wanted to do. My brother drew a lot as well so that pushed me to keep on drawing. I also used to make a lot of flipbook animations when I was younger, which evolved into learning animation at university.

When did you realise that you could have a career drawing and illustrating?

I’ve always wanted to be an artist. When I was younger I really wanted to work for Pixar or be an animator in the videogame industry. I was lucky that I was surrounded by people that had either gone into the creative industry already or had similar goals so I guess I never knew that it wasn’t an option.

The brief came in to illustrate past and present women in tech. Both I and my colleague Charlie worked on the look and style of the short animations and what type of patterns we wanted to accompany the illustration styles. My main role was to illustrate the portraits of the women in tech.

Can you share any details about a project you’ve worked on recently here at Uniform?

We worked on a self-initiated project to celebrate Uniform’s 20th birthday, where we envisaged what a design agency would look like 20 years into the future. My role was to model and animate the characters in this world which included an automated office dog that forces you to exercise, and pods that bioengineers brand influencers. We then transformed this into an augmented reality app as well as a printed poster, which was launched at Design Manchester and is now available on the App Store. 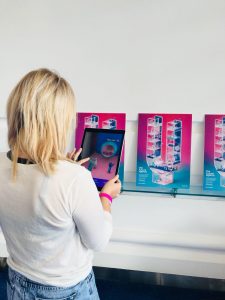 Here is a link to the project:thefutureagency.net

What’s the best thing about working at uniform?

It’s so fast paced so I feel like I’m constantly learning. Whether that’s new skills, software or just a different way of doing things. Also, being surrounded by really talented people motivates me to improve my own work.

Do you have any role models in the industry?

There’s no one person in particular as I feel like I’m motivated by a lot of people. I see a lot of amazing work from people I know personally or follow online and even if it isn’t directly in my field, it motivates me to push my own work further. I get a lot of my inspiration from Instagram as I mainly only follow artists and animators. There’s just an endless amount of inspiration on there.

Any top tips for those wanting to go into motion design or tech?

Just keep practicing and make sure it’s a constant thing. Think of it like you’re preparing yourself for an opportunity before it presents itself. Also, make sure you enjoy what it is you’re pursuing. I think people have this misconception that your job isn’t supposed to be fun, but I think it’s really important to enjoy it.