Self-doubt. It’s a common issue that affects people on a daily basis, whether it’s in their personal or professional lives.

Self-doubt and low self-esteem can be a huge barrier, stopping you from doing things that you’ve always wanted to do. And nobody should have to live like that. However, despite it being a common problem, it’s one that you can overcome.

After suffering with anxiety for a number of years, I know exactly how it feels to doubt yourself. If someone had told me this time last year the things that I would’ve achieved in the last twelve months, I wouldn’t have believed them.

So, for my first ever InnovateHer blog I thought I’d offer some tips that got me from where I was then, to where I am now.

As a good first step, it’s handy to realise when you’re actually doubting yourself. Then you’ll be able to recognise it and stop it before it prevents you from doing whatever it is you’re about to do – whether that’s a job interview, public speaking or just getting out of bed to ‘take on’ a particularly hard day.

Whatever it is, you’ll be sure to hear that little voice in the back of your head coming up with the usual phrases; “You’re not good enough”; “You can’t do this”; or “You’re going to fail”. 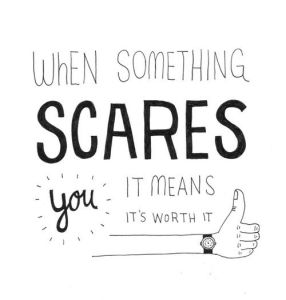 The first thing to recognise is that this is a perfectly natural part of being a person. Whenever you’re about to do something that scares you or makes you nervous, your body’s flight or fight system will kick in and try to make you run in the opposite direction. But when something scares you, it means it’s worth doing, right?

Try to relax, take some deep breaths and realise that what you’re going through has probably happened to every other person in the world at some point. Once you know it’s there, it makes it a lot easier to challenge it.

Once you’ve come to terms with how you’re feeling, you can start to challenge the negative thoughts you’re having.

Try and take each negative thought and challenge it with a confidence boosting counter argument. Maybe think of some examples of difficult situations you’ve faced in the past that you overcame.

Another way of challenging the negative thought is by realising what’s about to happen is temporary. Give yourself something to look forward to after whatever you’re about to do, that way you can put a temporary measure of time on it. Even if it’s something simple like going home and watching an episode of your favourite TV show – having something else to focus on will give you a reason to power through it, however small that reason is.

One of the things that a lot people do when they’re having this type of confidence battle is to internalise it all and keep it all in their heads.

It’s good to just be honest about how you’re feeling, instead of bottling everything up and trying to deal with the worry by yourself. By telling a loved one or a friend how you’re feeling, they can help to boost your confidence and try to offer some of the counter-arguments that your negative thoughts need.

If you’re in a situation where you aren’t able to speak to someone, try writing some thoughts down or drawing some doodles on a scrap of paper. Anything that works as an extension of your own thoughts at least gives you a way to get out of your own head.

Go and Do It

At the risk of sounding like a certain Shia LaBeouf meme or Nike slogan, just do it! Nothing will make you feel better than taking all of that energy and using it to smash that interview, talk in public, or whatever else it is you’re worrying about.

After coming away and giving it your best shot, it’ll give you an immense feeling of pride that’ll last for days or even weeks afterwards.

Surround Yourself with a Support Network

One of the biggest things that has helped me over the past year has been surrounding myself with people who I can fall back on for support when I need it, as well as supporting them in return, when they need me.

In a recent study conducted by Wiebke Bleidorn from the University of California, it was found that out of the 48 cultures studied, in nearly all of them men had higher self-esteem than women.

As this is clearly a big problem for women in particular, a fantastic community of women who support each other is ideal to help pick you up when you’re doubting yourself. Sometimes you aren’t able to do it by yourself, and that’s okay.

And of course, the InnovateHer network are a prime example of this!

So, there you have it, a few tips that you’ll hopefully be able to put into practice the next time you’re doubting yourself!

The image for this blog is a photo of me hosting a recent Creative Kitchen event championing women doing amazing things in tech. If someone told me I’d be doing that this time last year, I wouldn’t have believed it.

So next time you hear that voice telling you that you can’t, tell it to go away and know that you can. Who knows what you’ll end up achieving!