We’re so proud to have Professor Sue Black on board as a patron. We wanted to share her inspiring story with you…

At 25 years old she was a divorced single mum of three children, with 5 O’ Levels and no idea what to do next, as she had no career to build upon and hungry mouths to feed. So she decided to go back to school to do a PhD in computing as a mature student. Fast forward a few years, Sue became a lecturer at the University following her PhD and eventually Head of Department there. When Sue was offered the lectureship it meant a lot to her, as she was then earning a salary which was enough to be able to provide for her children. She is now an Honorary Professor in the Department of Computer Science at University College London, a Senior Research Associate at Lucy Cavendish College, Cambridge and has recently been appointed as a Professor of Computer Science at Durham University.

Throughout this time in academia, Sue observed that the computing sector in the UK was male dominated and she struggled to meet other women working in the sector. Many of the networking events she attended were almost entirely male and she often felt isolated. To help address this she decided to set up the UK’s first online network for women in tech in 1998, a community called BCSWomen, which was the first of its kind and is still going strong today. 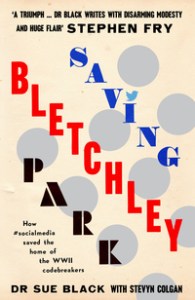 Following a trip there with BCSwomen in 2003, Sue decided to organise an online community campaign to save Bletchley Park.As it happens, 80% of the people who worked there in WW2 were women. It was not well-known that it was women who did a lot of the code breaking and made up the majority of the personnel.

The ‘Women of station X’ project, managed by BCSwomen, highlighted their contributions and you can view the wonderful video on the BCS website. In fact, the twitter campaign Sue instigated saved Bletchley Park and she has recently written a book about it, which you can find out more about on her website. Apparently this was the fastest crowdfunded book ever! We would highly recommend it.

At 49 years old Sue was made redundant from her job at the University. She re-evaluated her options and recognised that after all these years, she wanted to give back to the community. That is when #techmums was born, a social enterprise which empowers mums and their families through technology. For those of you who aren’t familiar with tech mums, it’s a fantastic initiative which acknowledges that a mothers influence can be critical when it comes to shaping the next generation and how they think about tech.

Sue started planning how to go about teaching mums all about tech, so that they could be more well-informed and pass their knowledge onto their children. She envisaged going from ‘computer says no’ to ‘computer says yes!’ The first pilot was a huge success, with researchers at the University working to chart the radical attitude changes of the mums involved. Many of the mums stated how much it had changed their perceptions on what is possible and what could be achieved by their daughters. And it is provided completely free of charge to mums.

From there, Sue has built a national brand with a tech mums ‘branch’ now existing in many cities across the UK. You can find out more about how to get involved with the initiative on the website.